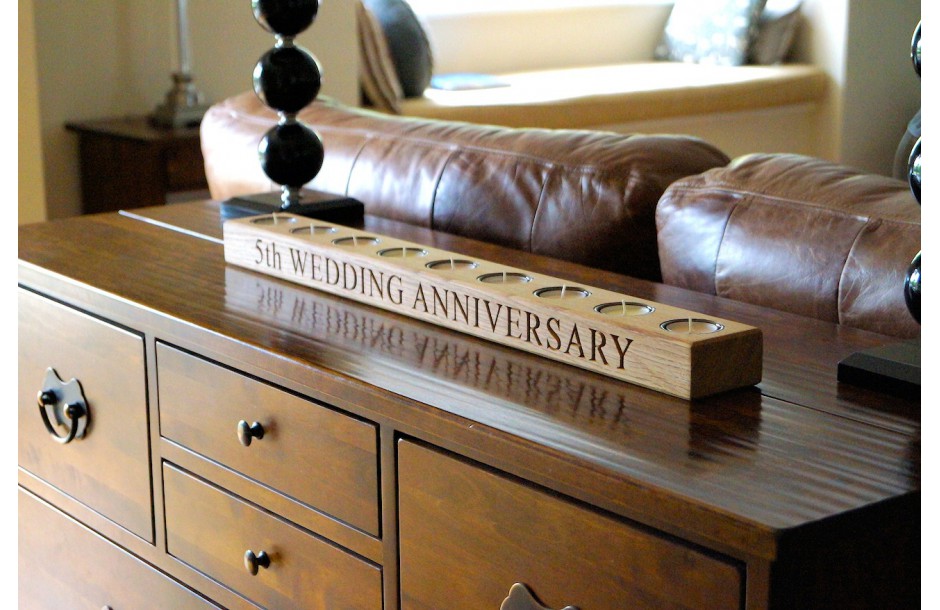 In ancient times, trees symbolised strength and wisdom. By the fifth year of marriage, the married couple develops strong deep roots like a venerable oak tree and is gaining insight and understanding from the mistakes and stumbling’s of the first five years. The pair has learned the most important lesson of all and the secret to a successful marriage: forgiveness.

Celebrating five years of marriage is a huge milestone. And like all wedding anniversaries, the 5th year anniversary has a specific material out of which traditional gifts are made: Wood. The tradition of giving wood on the fifth wedding anniversary comes from Roman times, when pieces of oak were given to represent strength, stability, and longevity — all necessary for a successful marriage. Now a days other types of wood are given as materials for fifth-year anniversary gifts, but the message remains the same: the marriage is planting roots and settling into a durable and long-lived union.

Wood might be a less conventional material than it was during the Roman times, but there are still many ways to give the traditional gift of wood on the fifth wedding anniversary. Whether you’re celebrating your own anniversary or looking for a gift for a special couple, read on to discover some exotic to unusual 5 year anniversary wooden gifts.

5 Year Anniversary Gifts Ideas for Her

This beautiful pair of love birds are completely unique, gazing at each other, both perched on a wooden mount. These are carved out from a single block of wood using an undercut style of carving.

If she already has more jewellery than she can safely store, a hand carved exotic looking wooden jewelry box might be a good 5th year anniversary gift idea.

5 Year Anniversary Gift Ideas for Him

Never let him miss place his specs or sunglasses again. Handcrafted from the sturdy Indian Rosewood the eye-catching shape has been hand worked with passion and attention to detail.

Elephants are loved for their gentle and wise nature and respected by cultures all over the world, often represents elephants as an embodiment of strength, stamina, patience, memory, family, and so much more. Makes a great gift idea for your partner who shares any of the traits that make these fascinating animals so iconic. After five years, he’ll appreciate something characterized by hard work and attention to detail — just like his marriage.